You might have noticed something interesting happening in your dairy aisle. Even though your dairy alternative is called “almond milk,” your yogurt is made with “coconut mylk.” They’re pronounced exactly the same way, so you can’t be blamed for wondering why the distinction matters and why the word mylk is promoted at all. Well, there’s actually logic behind the debate brewing in grocery stores across the country. (And, no, we’re not talking about the one over the average grocery bill.) Here’s why people seem to be so dramatic about calling dairy alternatives mylk.

And we’re not talking about consumers. This issue has been at the center of a debate raging at the Food and Drug Administration since July. This past summer, the FDA announced that they would look closely at dairy alternative labeling. It started with the milk versus mylk debate, but soon expanded to include yogurt. Then the American Butter Institute sent a letter to the FDA asking that they review plant-based companies calling their products “butter.” (No, for the record, this doesn’t include nut butters.)

But why are people concerned about mylk now?

Vegetarian and vegan alternatives aren’t exactly new, so why are people so concerned now? Why are they pushing for changes to FDA food labels on these types of products so late in the game? It seems to come down to popularity and marketing. Plant-based alternatives are more popular than ever, and companies that make them are now targeting non-vegetarians. This obviously makes the dairy and meat lobbies concerned.

“It’s only recently that these companies are trying to appeal to a consumer base that is not vegetarian, and that’s when the more animal-based terminology [like milk and meat] comes into play,” food historian Sarah Wassberg Johnson notes. Prompted by the dairy and meat lobbies or not, several states have already enacted labelling legislation. The North Carolina 2018 Farm Bill, for example, proposes a ban on all plant-based drinks labeled milks. Ten other Southern states need to sign for it to pass, though. 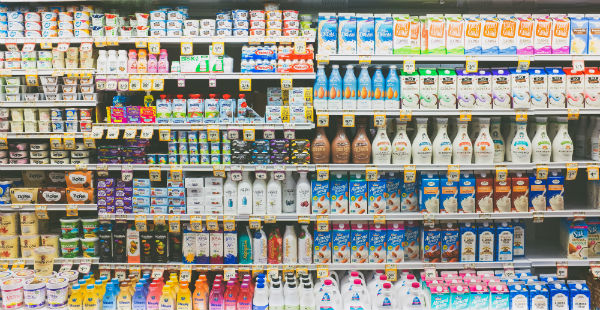 So why the concern over the word mylk vs milk on FDA food labels?

“Many dairy products, such as milk, yogurt, and certain cheeses, have standards of identity…which require certain components and ingredients in these foods,” explained FDA commissioner Scott Gottlieb, MD, in a September 2018 statement. Milk and cream, for example, need to be “the lacteal secretion…obtained by the complete milking of one or many cows,” according to the agency. There are even rules about the fat, added vitamins, and milk solids that have to be in these products.

But adherence to the standards of identity leads the agency to another concern over labels like mylk vs milk. The agency is worried that people will assume dairy and non-dairy products have the same nutritional profile. They underscore the risk of calcium and vitamin D deficiencies increasing if people make the swap but expect the same nutrition. For the record, many vegan dairy alternatives are fortified with vitamins and minerals just like milk. “It is important that we better understand consumers’ expectations of these plant-based products compared to dairy products,” Dr. Gottlieb said.

The government wants to make the labels in the grocery store perfectly clear. That’s a worthy goal, but raises another issue. If mylk can’t be called milk, then what are we going to call it? How should we name the coconut yogurts and lab-grown meats if we can’t call them “yogurt” or “meat”?

So what can you expect from FDA food labels?

For now, nothing, unless you’re in a state that has already enacted changes. The FDA is asking the public to weigh in on the debate. So head over to this page to submit your thoughts before November 27, when the comment period ends. Then it’s a wait and see on the FDA food labels for plant-based alternatives.

Sure, they might decide companies can’t use words like milk, yogurt, and meat. But most of us are used to their alternatives like mylk, cashewgurt, and chick’n already. It’s possible you’ll see more of these words or companies will start making up new names along these same lines. But it’s also possible that the FDA will rule that companies can use these words as long as they make their ingredients clear. (You’re reading the labels of the food you pick up at the grocery store already, though, right?)