It has thousands of devoted fans, its own (very) active hashtag, and rumors about it have reached mythological proportions. It’s not Kim Kardashian. It’s the celery juice challenge. If you never imagined a vegetable so boring could cause this much of a stir, we hear you. And it’s not just the social media attention you might have noticed but also the heated debates. Not sure why people are fighting about celery in your Instagram feed? Here’s everything you need to know about the trend, who started the great celery debate of 2018, and whether all those devoted fans are onto something. (If all you want to know is where to buy celery juice, that’s fine, too.)

What is the celery juice challenge, exactly?

It sounds more exciting than it really is. Essentially it’s a wellness routine promoted by Anthony William, known online as the Medical Medium. You’re not required to tag people like in the Ice Bucket Challenge and, though all the social media posts suggest otherwise, there’s no social media requirement at all.

To complete the celery juice challenge, you just need to commit to drinking 16 ounces of fresh celery juice every morning on an empty stomach for a whole month. Although William — who, it should be noted, is not a doctor — promotes a whole foods-based lifestyle, the challenge begins and ends with this morning routine. It’s not a meal plan or a cleanse. It’s just you, those morning minutes without your caffeine, and a glass of the bright green concoction.

Why are people fighting about the celery juice challenge?

The great celery debate of 2018 really comes back to William and not the celery. As mentioned, William does not have formal medical training. Rather, he claims to have medical knowledge that’s as of yet unsubstantiated by science because it’s fed to him by a higher power. Dubious divine messenger storyline aside, the second big issue is that he’s making health claims about celery juice that aren’t backed by science.

Among those claims is the idea that celery juice fights Epstein-Barr Virus (EBV), which William believes is the cause of many autoimmune diseases like Hashimoto’s thyroiditis. “Pathogens such as viruses, including EBV and shingles, are the true cause of the inflammation that’s mistakenly considered an autoimmune condition,” he writes on this subject. “Medical communities just aren’t aware of the real cause yet.” To be clear, he’s not the only one that believes this, but there’s no evidence to support this claim. William also claims that celery juice can “cleanse the thyroid of toxins and bolster production of the thyroid hormone T3.”

Essentially, William is promoting the idea that celery juice heals many conditions that need attention from trained medical professionals, like hypothyroidism. Yes, there are plenty of celery juice benefits, but some of his points that get repeated on social media are just hype. Bottom line: Adding celery juice to your diet can only help, but please talk to your doctor if you have medical issues. And never stop taking medicine without consulting your doctor first.

What you can learn from the celery juice challenge

I actually think we can all learn something from the celery juice challenge. Hear me out if you’re feeling very skeptical right now. What William’s challenge gets right is not the nutrition, but rather the habit. To reap the benefits of anything in the health and fitness world, you need to be consistent. William nails that with his challenge by suggesting people commit to doing something every single day.

I don’t care if you’re trying to lose weight and keep it off, give your metabolism a boost, or just eat and move well to feel your best. Anything you do to feel good and function well will only work if you do it consistently. So maybe for you it isn’t celery juice. Maybe it’s getting your vegetables in by committing to one salad-based meal a day. Maybe it’s as simple as taking your vitamins in the morning. It could even be setting up a routine for jogging 3 times a week.

Essentially, to judge the results, you need to create a baseline. And that means you need to create a habit. If a challenge makes it easier for you to stick to something, great. But please focus less on the challenge, or the green juice, and more on how it’s shaping your routine. It really could mean the difference between saying “that didn’t work for me,” and hitting your goals. 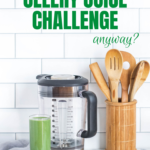 1 thought on “What is the celery juice challenge, anyway?”